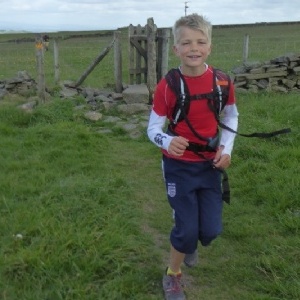 Jamie Hargreaves, in Year 9 of Poynton High School,  recently ran the legendary Gritstone Grind, a 36-mile trek from Disley to Kidsgrove inspired by his grandmother.
He completed the run in 10 hours – two hours ahead of schedule.

Ali, his mum  said: “We are both very, very proud of Jamie. It is quite an achievement for a boy his age.They set off at Disley train station at 8.30am and trekked to White Nancy, Teggs nose and down from The cloud. Uncle Gerard and cousin Charlie helped them at the end when dad’s knees gave in, finishing at Kidsgrove train station at 6.30pm.”

Jamie is aiming to raise as much money as he can for the Alzheimer’s Society as his gran suffers from the condition and  so far Jamie has raised £1,065, twice his initial target.

The Gritstone Trail is renowned for some of the most stunning ridge walks and views over Cheshire.